More than 60 people attended the Jubilee Dinner Dance on 7th June including Jim Turner from Australia. Jim had emailed (from Australia) for tickets for himself and his sister who he was visiting in England. Jim is featured below (3rd from left). Next to him is Roy Brockhurst with his grand-daughter Grace and  to the far right of picture is Dorris Fletcher from Ellesemere Port. A full set of photographs are shown in the next header tab (see Jubilee Dance Photos) 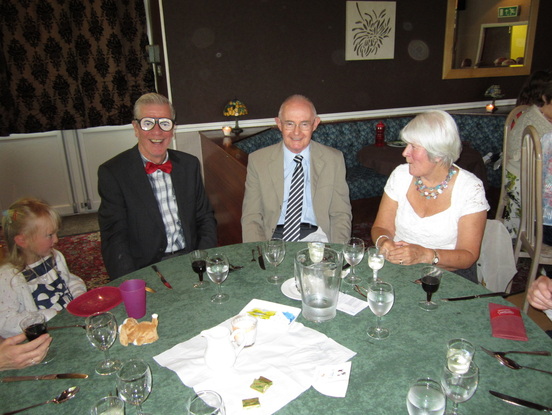 Jim is third from left

A video of the Hokey Cokey (taken at the Jubilee Dance) is shown below:

At the dance on the 24th May we had a guest appearance of Roy Brockhurst who played a couple of songs during the tea interval.

A founder member of The Pathfinders Roy played in the famous Cavern and other Wirral venues in the 1960's appearing on the same bill as the
Beatles, Rolling Stones and the Searchers. We were privileged to see Roy in action at the Community Centre

For the first song Roy played Marie's Wedding:
His second song was the very popular Fields of Athenry:

For members who missed Roy's appearance there will be another opportunity later in the year when Roy has promised a repeat performance.

On ITV, (last Wednesday 9th February) a programme titled "I  was there when the Beatles Played the Cavern" was broadcast. Although  the original Cavern was demolished in 1980 a replica (opposite in Mathew street) is now open and attracts visitors from all over the world. Towards the end of  the programme it displayed a plague (covers a complete wall in the new Cavern)
with the groups that played at the original Cavern in the 1960's. and in particular the Pathfinders took a central spot. The
Pathfinders were a rock group that were on the same bill as the Beatles, Rolling Stones, Moody Blues, Searchers  etc., and appeared at the Cavern on many occasions. We are privileged to have one of the founder members of this  group as a member of our tea dance. Roy Brockhurst (Roy & Mal) was the bass player with the group for over six years in the 1960's and rubbed shoulders with all the groups above and appeared on the same bill as the last visit to the Cavern by the Beatles.
Powered by